All the Information about Wood-Waste Recycling You Could Need!

Horizontal Grinders were first introduced in the late 90’s as an alternative to the tub grinder.  Similar to tub grinders, there are a variety of sizes and horsepower, designed to handle land-clearing debris, bark, brush, logs, stumps, wood construction and demolition (“C&D”) material,

Most horizontal grinders are powered by diesel engines, although many manufacturers also offer electric options.  Caterpillar is the most common brand of engine in larger machines, although Cummins and John Deere are used frequently as well.  Horsepower ranges from the mid 200’s to as high as 1200 in the largest machines. 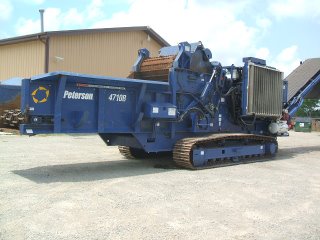 This is intended to be a brief introduction to horizontal grinders.  For more information about finding the right horizontal grinder for you operation see the articles in the Find the Right Equipment for the Job category.

How To: Profitable Recycling Operation (6)

Getting Started in Recycling (5)

Find the Right Machine For the Job (3)